Home / How I Made it In the US / Made in America: Indian Immigrant Threads Her Way To Success 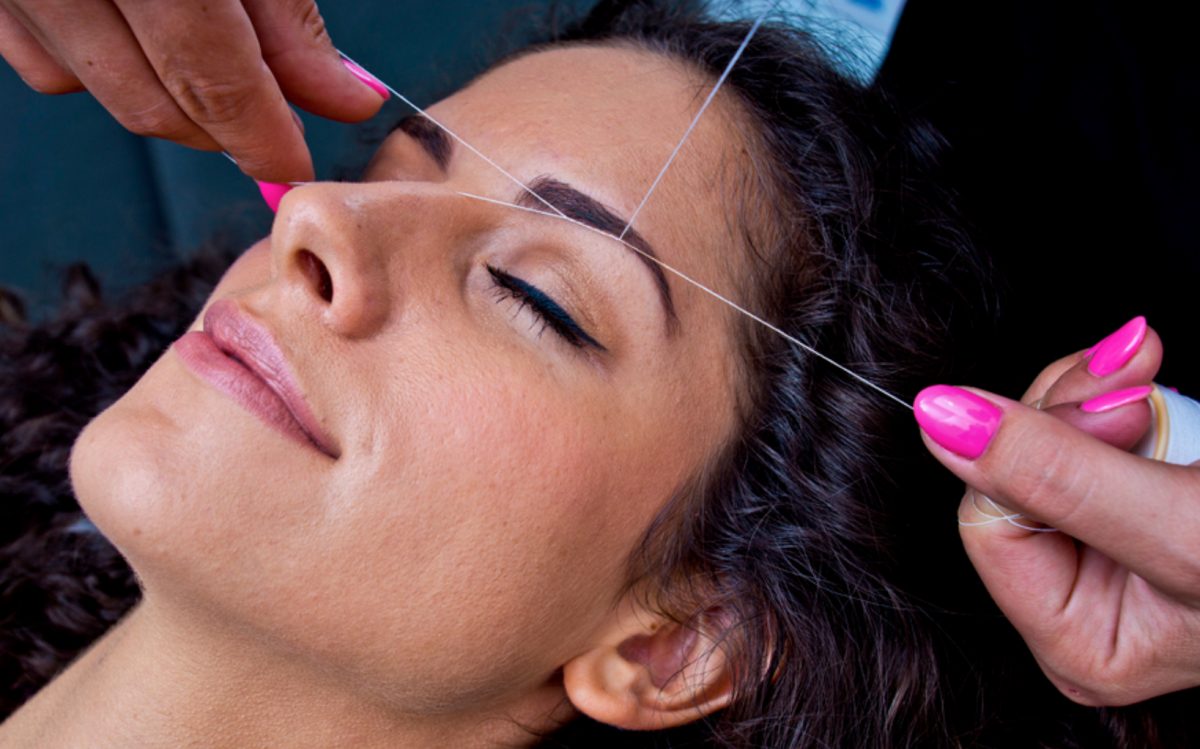 Indian immigrant Reema Khan turned an ancient beauty technique from her home country into a $14 million business in the US.

As a child in India, Reema Khan used to spend hours after school helping out at her mother’s beauty salon. That experience came in handy after she moved to America, got an MBA, found a job, was laid off—and had to figure out her next best step. Her answer: start her own company. And what better business than the one she knew best—beauty salons?

Still, demand was slow until she re-discovered her foreign advantage: a technique for shaping eyebrows she’d learned in India from her mother. Called eyebrow threading, it uses a thin cotton thread to pluck hairs at the follicle level, allowing for more precise control and less discomfort than other methods. Now, 17 years later, Khan runs a thriving $14 million business named s.h.a.p.e.s Brow Bar with 350 full and part-time employees.

From MBA to Beauty Salon Owner

Khan grew up in Hyderabad, India’s fourth-largest city, and loved to hang out at her mother’s salon. But Khan wanted something more, so after graduating from college, she moved to Detroit in 1996 to get her MBA in accounting. There she met her husband and, after graduating, the couple moved to Chicago, where Khan got a job with a recruiting firm and her husband started working in the IT department of a major company. The future seemed bright, but following the economic crisis after 9-11, Khan’s employer had to cut back and she was laid off.

As Khan pondered her next move, she decided that trying to find another position was foolish. “In America, you cannot depend on your job,” she says. The only alternative, she figured, was to become an entrepreneur. But what on earth should the company be? Khan ran through her interests and areas of expertise and realized that, thanks to all those years spent at her mother’s place, she knew a lot about beauty salons.

“In America, you can’t depend on your job.”

Her first move was to go to beauty school and get a license as a cosmetologist. Then, in 2002, she found work in a salon, where she hoped to learn more about the inner workings of the business and the US beauty industry. One year later, she and her husband bought the company from its owner for about $60,000, borrowing some of the money from her parents and friends and maxing out about five credit cards.

Trouble was, business was much slower than Khan had anticipated. She soon realized that if she didn’t make some changes, she’d have to close the salon. Her clients seemed to love her eyebrow threading, a process using a thin cotton thread for plucking hair, common in India, but little known in America. “Even if I charged $5, they’d tip me $25,” she says. Perhaps there was an opportunity in that?

Then a client suggested Khan set up a booth at a local convention for products and services aimed at women. Instead of cutting hair, Khan would do eyebrow threading. So, Khan set up a booth at the convention center, and was astonished at the response. “I lifted up my head at one point and saw a line of 25 women waiting to get their eyebrows done,” she says. “I realized I could make a lot of money doing this.”

“I lifted up my head at one point and saw a line of 25 women waiting to get their eyebrows done. I realized I could make a lot of money doing this.”

Khan and her husband hashed out ideas for the best way to set up shop. Malls, with their high foot traffic, seemed ideal. So, they hastily assembled some marketing materials, mostly pictures of eyebrow threading, and started contacting leasing offices at nearby malls. However, when the malls saw Khan’s bank statements and discovered she had no previous experience, they all turned her down. Plus, “Most didn’t even understand what I was talking about,” she says.

Finally, she got a break. One mall, Ford City Mall, kept turning her down, but Khan was persistent; she kept coming back. It was during her third visit that Khan had an inspiration. The manager, luckily, was a woman. Perhaps she’d understand the service better if Khan conducted a demonstration. “I told her, look, just let me do your eyebrows,” she says. It worked. Intrigued by her experience, the woman let Khan set up a temporary booth in the mall.

Unfortunately, they attracted few customers initially. Like the mall managers, most shoppers simply didn’t understand the concept of eyebrow threading. After only two months, Khan and her husband were on the verge of failure and bankruptcy once again. Determined to give it one last try, they created flyers explaining what eyebrow threading was, and perhaps more importantly, they hired a saleswoman to help drum up interest. But they didn’t choose just any salesperson. America, Khan, knew, was a diverse country populated by many ethnic groups. And she figured shoppers would be more comfortable with an African American, since that was the demographic who largely patronized the mall. When people dropped by with questions, the new hire would step in and explain what was going on. Soon, more shoppers started stopping by to watch and, gradually, the word spread. Khan went from serving 20 customers a day, to 60, and then 80.

After six months, she was making about $7,000 to $8,000 a month—and Khan knew it was time to approach more malls. Making a persuasive case was a lot easier now that they could show their concept’s money-making potential. Then, when they were in five malls, with about $20,000 in sales per month, the Khans approached the high-end Orlando Square Mall, where managers not only liked the concept, but also wanted them to set up a more permanent kiosk—a mini storefront in the middle of the aisle– instead of a booth.

Hiring eyebrow threaders was a challenge at first. But, because she had relationships within the South Asian community, over about six months she was able to build up a network of experienced threaders by recruiting at temples and mosques, as well as cultural events likely to attract such people. Many of the new hires didn’t drive, or own a car, so she sent a driver to pick them up and take them home every day. But that was well worth the effort, if it meant employing veterans in the art of eyebrow threading.

But, then Khan started expanding to other cities—first Houston, then Dallas and Atlanta—where she usually started by setting up temporary booths. There, the matter of hiring was trickier.

Without a network to tap, Khan decided to fly several employees to each city and put them up for two or three months. While they staffed the mall booths, Khan set out to find locals to hire, placing ads on the radio and in newspapers, visiting temples and mosques and handing out flyers. Her best success was with women in homeless shelters desperately in need of work. Then, she hired and trained her recruits, sending her other employees either back to Chicago or on to another city.

Her best success was with women in homeless shelters

In 2009, Khan and her husband decided to move their headquarters to Los Angeles; the climate was better for a sinus condition he suffered from. And they also went about setting up shop in malls throughout southern California; they now are in 24 locations. In the meantime, the company also expanded to more malls in Arizona and New Jersey.

She also intends to build a spa in India. “There are people with a lot of money in India and there’s a lot of room for a niche in the beauty market,”

Exporting Her American Advantage To India

Now, Khan is starting to convert her kiosks into regular storefronts. And she’s expanding her services to include makeovers and facials. In addition, she’s planning to launch her own brand of beauty products.

That’s not all. Khan also intends to build a spa in India that features what she calls “an American flare”. She will have three to four sections, each providing a different service, such as haircuts or bridal makeup. “There are people with a lot of money in India and there’s a lot of room for a niche in the beauty market,” says Khan with her characteristic confidence. “I’m sure it will be a big hit.”